Coming to us across twelve centuries, the prophecy about the coming of the Shambhala warriors illustrates the challenges we face in the Great Turning and the strengths we can bring to it. Johanna learned in 1980 from Tibetan friends in India, who were coming to believe that this ancient prophecy referred to this very planet-time. She often recounts it in workshops, for the signs it foretold are recognizable now, signs of great danger.

These are varying interpretations of this prophecy, some portray the coming of the kingdom of shambhala as an internal event, a metaphor for one’s inner spiritual journey independent of the world around us. Others present it as an entirely external event that will unfold independent of what we may choose to do or what our participation may be in healing of our world, a third version of the prophecy was given to Johanna by her friend and teacher Choegyal Rimpoche of the Tashi Jung community in northern India.

“There comes a time when all life on Earth is in danger.  Great barbarian powers have risen. Although these powers spend their wealth in preparations to annihilate one another, they have much in common: weapons of unfathomable destructive power, and technologies that lay waste our world. In this era, when the future of sentient life hangs by the frailest of threads, the kingdom of Shambhala emerges.

You cannot go there, for it is not a place; it is not a geopolitical entity. It exists in the ears and minds of the Shambhala warriors – that is the term Choegyal used, “warriors” Nor can you recognize a Shamhbala warrior when you see her or him, for they wear no uniforms or insignia, and they carry no banners. They have no barricades on which to threaten the enemy, or behind which they can hide to rest or regroup. They do not even have any home turf. Always they must move on the terrain of the barbarians themselves.

The Shambhala warriors have the courage to do this because they know that these weapons are manomaya. They are “mind-made”. Made by the human mind, they can be unmade by the human mind. The Shambhala warriors know that the dangers threatening life on Earth are not visited upon us by any extraterrestrial power, satanic deities, or pre-ordained evil fate. They arise from our own decisions, our own lifestyles, and our own relationships.

So in this time, the Shambhala warriors go into training. When Choegyal said this Joanna asked “How do they train?” They train, he said, in the use of two weapons.  “What weapons?” And he held up his hands in the way lamas hold the ritual objects of dorje and bell in the lama dance.

The weapons are compassion and insight. Both are necessary he said.  You have to have compassion because it gives you the juice, the power, the passion to move. It means not to be afraid of the pain of the world. Then you can open to it, step forward, act.  But that weapon by itself is not enough. It can burn you out, so you need the other – you need insight into the radical interdependence of all phenomena. With the wisdom you know that it is not a battle between “good guys” and “bad guys”, because the line between good and evil runs through the landscape of every human heart.  With insight into our profound inter-relatedness – our deep ecology –you know that actions undertaken with pure intent have repercussions throughout the web of life, beyond what you can measure or discern. By itself, that insight may appear too cool, too conceptual, to sustain you and keep you moving, so you need the heat of compassion. Together these two can sustain us as agents of wholesome change. They are gifts for us to claim now in the healing of the world.

The Work that Reconnects belongs to a much larger cycle of time than our fragmented attention spans, so it is very important to just keep on going. Listen to how Poet Rainer Marie Rilke puts it, in a poem in which he lets God speak:

“You, sent out beyond your recall, go to the limits of your longing, Embody me.
Flare up like flame and make big shadows I can move in.
Let everything happen to you: beauty and terror. Just keep going. No feeling is final. Don’t let yourself lose me.
Nearby is the country they call life. You will know it by its seriousness.  Give me your hand.” 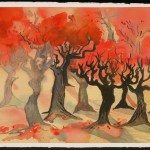 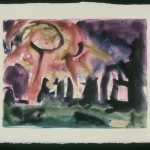 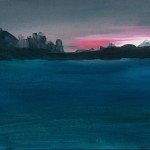 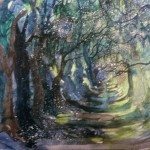 Seven large paintings and a series of thirteen moon calendar paintings with cover piece illuminate the issues and questions about agriculture, species endangerment and the human dependency on insects, bats, birds and other creatures to pollinate our crops and balance our world. The underlying themes are love, loss and hope. Proceeding this show, Catie Faryl has explored this topic with exhibits titled “The Beekeeper’s Daughter” (which speaks to her own background and interest in the topic) ,“Observations from the Hive” (an irreverent study of the planet’s most confused social beings, humans), and “Global Warning: Mother Nature Says Clean Up Your Room” (title speaks for itself!) 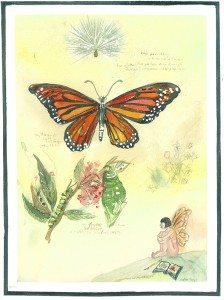 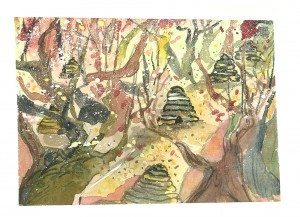 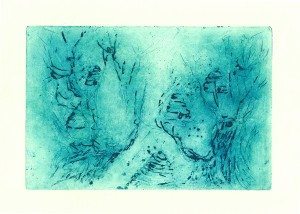 Day in the Orchard 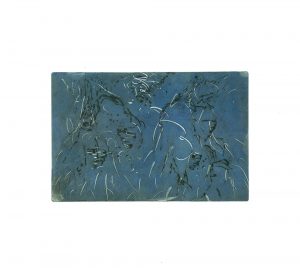 Night in the Orchard 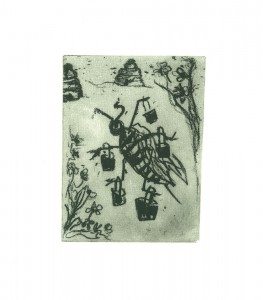 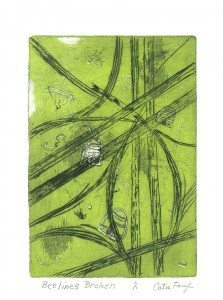 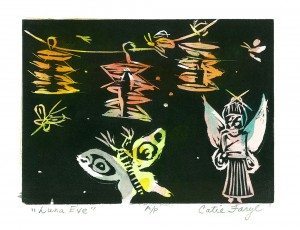 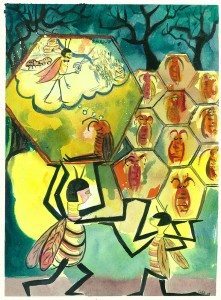 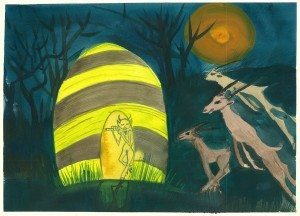 Night of the Beehive Poet 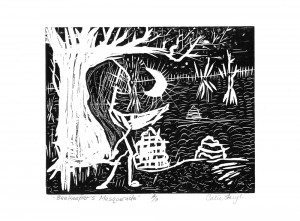 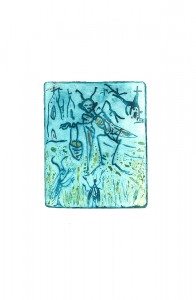 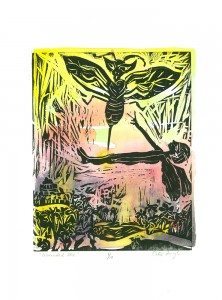 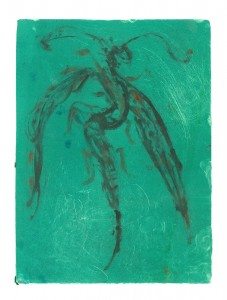 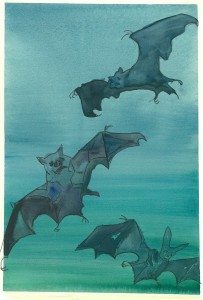 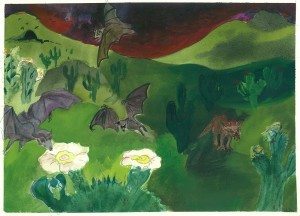 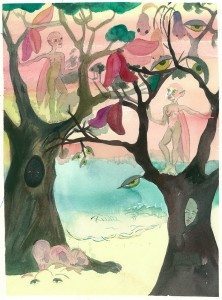 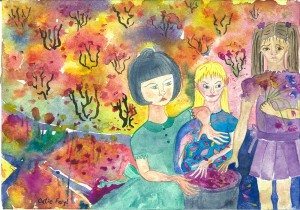 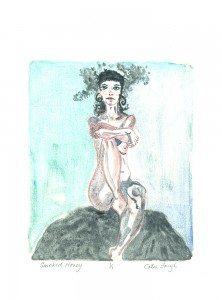 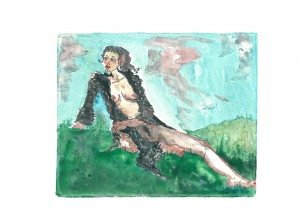 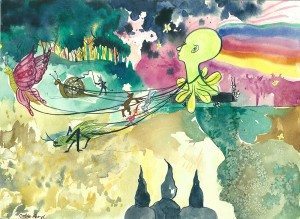