Catie Faryl’s art exhibit, “Bridges to 2050” departs from frustration and gloom by offering optimistic portrayals of common sense solutions and hopeful information on better outcomes for people, planet and all sentient beings. With thought-provoking pictures of where we are and new paths open to us, West Coast Artist Catie Faryl gives inspiration for social, economic, political and environmental justice and shares old and new solutions, technologies and ideas to rebalance our relationships to the land and all living creations. Her paintings and writings offer insight into some choices and decisions ahead and contemplate ways we can move in an upward spiral through better stories, community effort and systems both ancient and visionary, for a sustainable future.

EARTH BRIDGE:
Humans Be Still! Make room and care for all elements and sentient’ beings 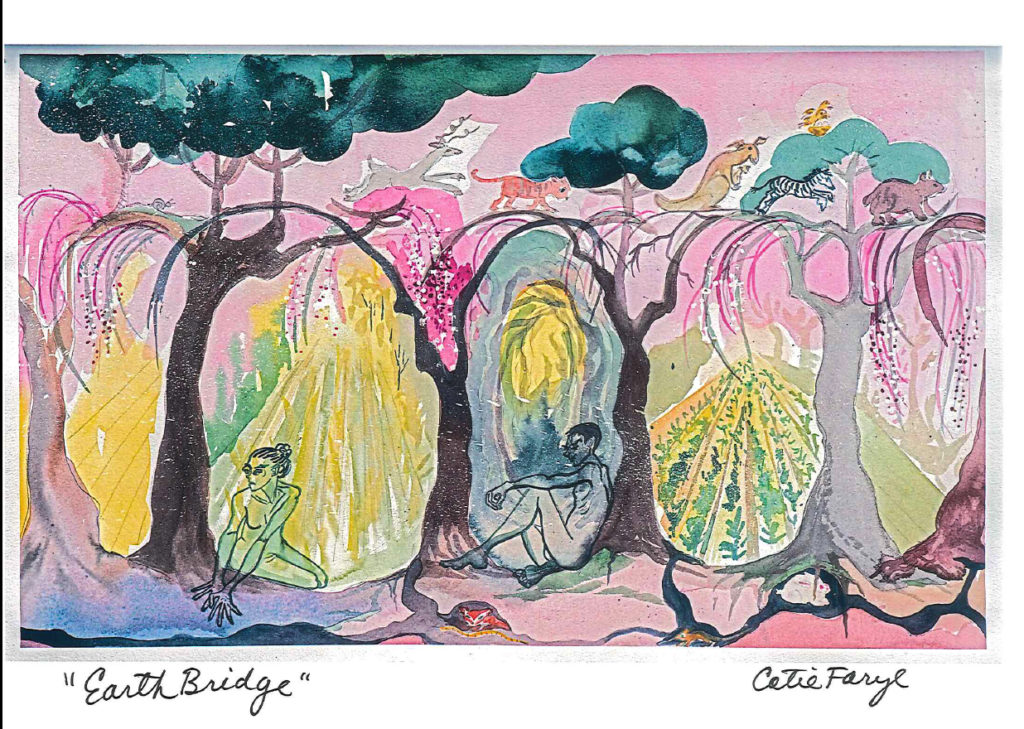 Books:
Frankenstein’s Cat by Emily Anthes
The Sixth Extinction: An Unnatural History by Elizabeth Kolbert
The Ecology of Eden by Evan Eisenberg

Links:
IUCN Red List of Threatened Species
Center for Biological Diversity
World’s fragmented forests are deteriorating
American Museum of Natural History Extreme Extinction
Globalization— the Good, the Bad and the Ugly
The Extinction of Fruits and Vegetables in 80 Years
The Charter of the Forest
Amphibian Ark: Frightening Statistics
Collapsible woven refugee shelters powered by the sun
Human Population: How Does It Compare To Other Species?
The Most Ancient and Magnificent Tress From Around The World 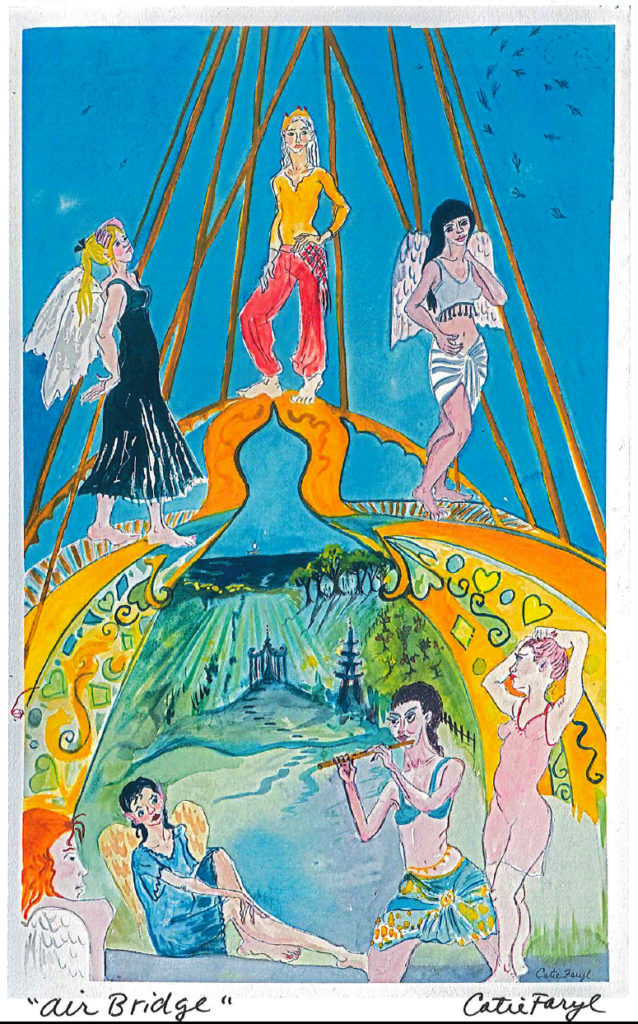 Books:
Art as Medicine by Sharin McNiff
Lost Lore: A celebration of traditional wisdom by Editors of Chambers
The Human impact on the Natural Environment: Past, Present, and Future
Geo-Engineering Climate Change: Environmental Necessity or Pandora’s Box? by J.Michael Thompson

FIRE BRIDGE:
Carry the torch of new and ancient solutions 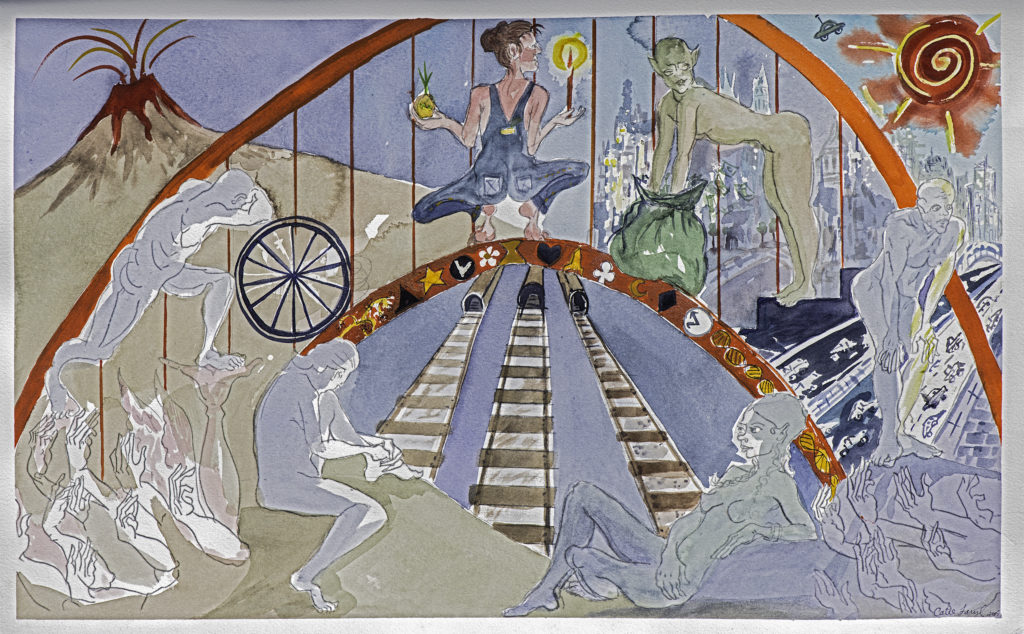 Books:
A People’s History of America by Howard Zinn
The Great Work: Our Way into the Future by Thomas Berry
The Universe is a Green Dragon by Brian Swimme 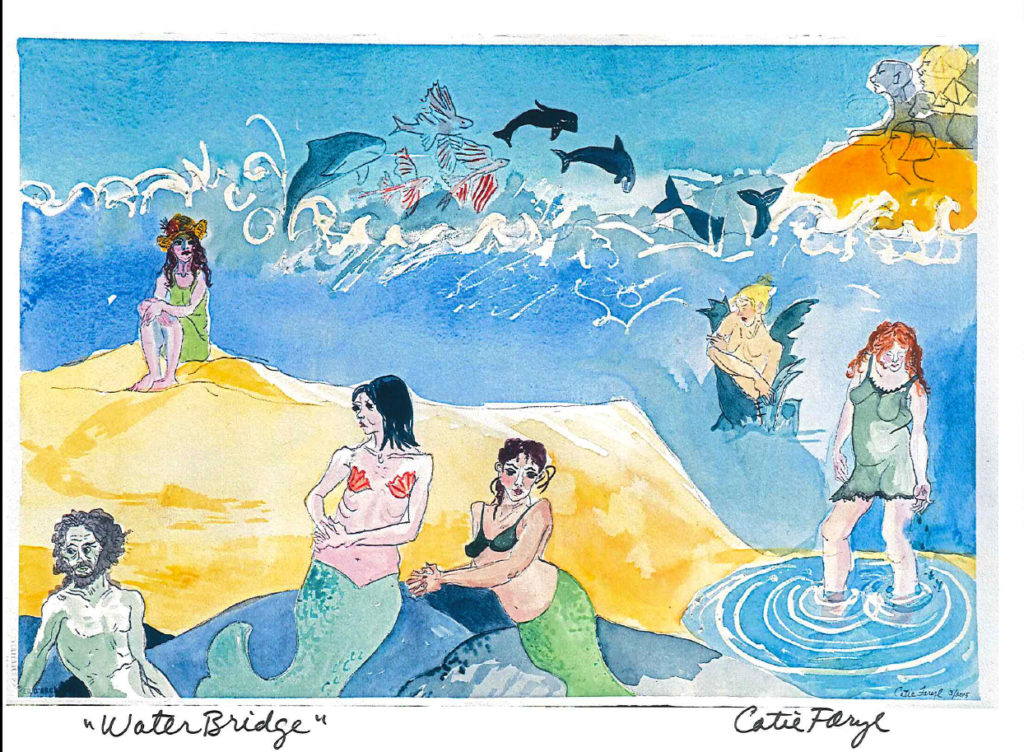 Books:
The Silent Spring by Rachel Carson
The Poison Spring: The Secret History of Pollution and the EPA by E.G. Vallianatos
Cadillac Desert: The American West and its Disappearing Water by Marc Reisner
The World Without Us by Alan Weisman

“HISTORY OF OUR ARDUOUS JOURNEY

2017 – Recognition that Climate Change is real and that current National leadership is unwilling or unable to address it. The rise of local group, mayors and governors starts ﬁlling the void.

2018-2020 – Economic setbacks caused by multiple, massive floods, ﬁres and other disasters continue. Cook stoves and all vehicles are converted to run on clean-burning alcohol fuels made from organic farm waste and materials (with systems like those developed by Blume Distillation in Watsonville,CA)

2021 – Congress with a new president ﬁnd the BoomerCorp program, and are able to provide “Health Care for All” with a strong, forwarding thinking group of senior citizens who drastically reduce health care costs via prevention and intervention. Toxic products, plastics and other carcinogens are banned and removed from the environment.

2022 – Congress ﬁnds the C.E.T.A. Program, adding thousands of people to bring new ideas and innovate to governments and businesses and help their implementation, as climate consequences and other factors further aggravate the safety and livelihoods of citizens.

2025 – Fire and ﬂood management are given top priority. GMO Trees are banned. Jobs are created to do the physical labor of thinning small trees and undergrowth in forests, as well as weed abatement and weed harvesting for biofuels which eliminated the use of toxic sprays.

2027 – Revamping of the entire waste management system via Creative Reuse Depots where “trash” is made proﬁtable by a new work force of traveling, trained people who make it into energy, non toxic fertilizers, soil building products.

2028 – Fracking and export of domestic oil to foreign entities is made illegal. All domestic energy from fossil fuel and GMO are deemed usable only as “bridge energy sources” for new sustainable/renewable energy sources until 2030, becoming illegal for any use on January 1, 2030.

2031 – With the sunset date for fossil fuel extraction and use in sight, a total retrench of the packaging and delivery systems was begun. Sand from dredging to mitigate climate change storm surges is a source for glass factories to spring up on both coasts. Local food and local products are favored and those requiring long transport routes are scorned. It becomes socially unacceptable to buy from far away. The national trucking of goods decreases as local sourcing and public sentiment against long distance “imports” increased.

2035-2050 –  American society, seeing the errors made in the last century become interested in values, ethics and education. Postal codes are used to determine what can be legally sold or consumed, so illicit and dangerous items of all kinds are greatly curtailed. The world is recovering from a scary period where our excesses compromised our common sense and our environment. People grow closer together realizing that there is real no other or better way to live than within our means. Reclaiming the commons, all that we share, respect and care for all sentient beings and our natural world is more fulﬁlling than the treadmill/cancer of endless and unsustainable “growth” — which is actually only resource exploitation, extraction and stealing from the future of the coming generations.

As a member of the Art Presence Art Center, I had the opportunity to show my collection of monotypes and paintings, Bridges to 2020, at the Medford Library. The show has been held over through the end of July 2015! Below is a video with my comments on the paintings. I’ll post an edited version soon but wanted to get this one out there for people to see. I hope you will find it inspiring, and will come to the Medford Library to see the collection in person before the end of the month!