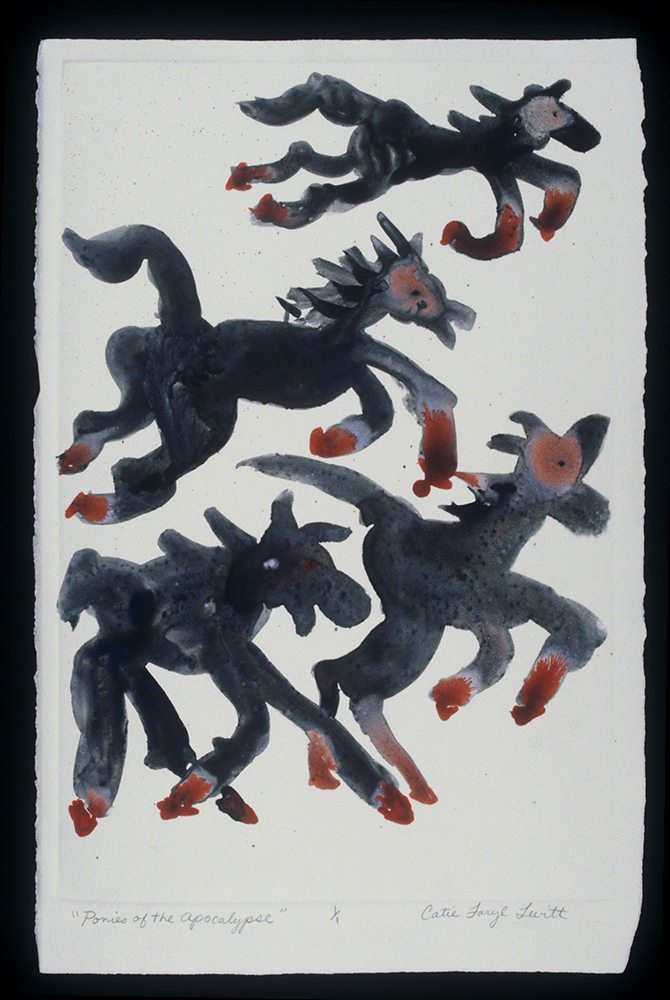 Ponies of the Apocalypse

Pony Express of the Apocalypse

In the post office line, there’s a digital sign
(Countdown to Y2K or Armageddon or
time to start on your new stamp collection?)

Among thoughts of packages and bombs
And vacation hold mail are thoughts of candles, stashes
Of bottled water, cans of beans (or beer), sleet, rain, ice, and fear
And the postman (delivering doom or deliverance or discount
Coupons) coming down the road.

In movie lines, windblown news and rudeness.
On the screens, harsh bloody scenes of a world on the brink
Of mindlessness, mindfulness or meltdown,
With mature audiences missing in action.

A howling in the night-
I saw the best minds of my generation
Go out to get another latte.

City dwellers in carnal embrace with the asphalt jungle
Limber lower now.
I heard that pavement burns almost as well as coal.
The city – future or furnace? The party never stops.

Country folk in backwood bars
Plot backward vigilante moves.
That, or roll up the roads and post “Quarantine” and “Anthrax” signs
On their outskirts, one.

Tent towns the likes of which the babyboomers
Have never seen (or boomtowns is another scenario
Hardship worse than being cut off in traffic.
(A major paradigm shift…)

Road rage on a Grand Scale:
The MILE-lennium – like a mile of angry drivers
Multiplied and whipped by a thousand year
Traffic jam – COMETH!!

The Mi-LINE-eum – Great Time Queue of the Western World
7 Wonders of 7 Hours standing in line for a spoonful
Of soup and half a rotten potato – COMETH!!

Mile after Mile, Line after Line
Soft bodies collide with hard reality
And pray for lost innocence or virtuality

Oldsters reminisce; remember the crash of ’87?
When they put in those stops so
nothing like this could ever happen?
Youngsters flip off the spectre of emptiness
And swear they meant to do nihilism.

A misty wraith curls its ghostly fingers
Around our machines and squeezes Fear.
Vapor enters chambers and like a trapped rat
Freezes and does not move on.
A pallor drapes the sun, swaths the moon and
Limits love. Green things are violated and wilt.
No little cat’s feet, this fog, this fear, this cloud, this special delivery
Airmail letter of Despair

Years down the road the dust will settle
And we might know which horseman rode in the year 2000.
Or maybe those horses will arrive late, riderless and without vengeance –
Just a pretty pony express to carry us further down
Our manmade road to destruction.