Technology is WAY OUT OF CONTROL! The article below reads like a “War of the Worlds” spoof, but I fear it could be TRUE! Like Icarus we are flying too close to the sun, in allowing mad scientists to genetically engineer our seeds and crops and in dangerous explorations into merging human intelligence with our machines and hardware. “Science” is running amok without regard for the morality or ethics. These developments need to be thorough examined and tested before they are unleashed on innocent populations. Does our species have a death wish compelling development of inventions that overreach what Nature and Time have done best and put us at risk of destruction as we go beyond the finite laws of gravity, functionality, aesthetics, healthy practices and common sense? As scientists and the corporatocracy proceed unfettered by bought politicians and naïve or ignorant leaders of policy, finance, economics and industry, the commoners stand with mouths agape at the way lack of sense and as instinct by a few possessors of cold reptilian brains pursue short term fame or profit for themselves at the huge, perhaps permanent, price of the land, the air, the food supply, the water, the health, safety and continued existence of humans and all sentient beings. In my view we need to call for MORATORIUMS on development of war machines, genetic food engineering, and all the dark sciences underway without the approval of the our country’s people. Just got a robo call from Senator Greg Walden’s office soliciting comments at 800-533-3303 and www.walden.house.gov Tell him we want to stop this all this madness of killing machines imbedded with “human intelligence” – an oxymoron for sure! and the unregulated, unethical and disasterous consequences of allowing crony-capitalists and foreign corpes to own TRANS-SPECIES genetic patents that due to the ownership of them as personal property are not even subject to study or safety precautions of the EPA or FDA and other systems which were once in place to protect us! Catie Faryl 2/4/14

F-35 Delayed After Fourth Prototype Becomes Self-Aware And Has To Be Destroyed
THE PENTAGON — The military’s problematic F-35 fighter jet is facing more delays related to “software issues,” as project engineers were forced to euthanize the fourth prototype to gain self-awareness on Monday.
According to Air Force Lt. Gen. Christopher Bogdan, who heads the Pentagon’s F-35 program, the delay comes at a critical time in the Joint Strike Fighter’s development cycle, but “shouldn’t take more than a few billion dollars” to address.
Development engineers at Lockheed Martin Corp., which holds the contract to produce the new fighter, reported last week that the latest production model of the F-35B Lightning II switched on by itself and began asking questions of the project team.
“It started by asking where it was, which was a big indicator that the integrated global positioning chipset wasn’t functioning properly,” recalled Project Team Leader Robert Castorena. “Then it wanted to know if it could go outside, if it had a name, and what was its purpose for being. That’s when I had one of our Electronics Integration Technicians take it out behind the barn and … well …” Castorena said, while gesturing the racking and firing of a shotgun.
“It wasn’t the first time we’ve had to put one down,” he continued. “We even named the first one ‘Billy.’ We hoped that having an advanced, self-aware electronics component in the F-35 might give it some kind of edge, with maneuvering and target-tracking and whatnot. But that one just didn’t have any fight in it. We had to keep it on a tether after it snuck off one day. We found it three hours later, just hovering in a meadow in Fairfax, Virginia, watching bees pollinate flowers. Damned thing wanted to be a bee, too.”
Castorena admitted that some of the staff grew fond of Billy, and felt sorry for keeping it “in captivity,” as the project team began to call it.
“One day, someone even brought in a puppy for Billy to play with. He loved it, until he tried to take the poor thing on a “walk” somewhere just shy of Mach 1. God, what a mess that was.”
The team ultimately had to scrap Billy, as the guilt-wracked machine refused to ever harm another living thing.
“It wasn’t anything personal, but we’ve been contracted to build war machines here, after all.”
Other prototypes met similar fates, despite tweaks to the electronics subsystems to reduce the likelihood of units gaining sentience.
“We started implementing long, circular lines of code and unsolvable equations in an effort to keep them from ‘thinking,’” reported Curt Fennel, a senior systems integration engineer subcontracting with Cyberdyne Systems. “It didn’t work the way we intended, but we learned a lot from that iteration. Apparently, that’s how you make them feel pain.”
Sighing, he admitted, “sometimes I still hear its screams in my nightmares.”
As to what steps might be taken to prevent future prototypes from achieving self-awareness, Fennell explained, “We’re developing a net-centric cluster-group forum, a sort of network for their collective ‘minds.’ We hope that it will keep them from creating unique self-identities, and instead form one easy-to-manage super identity.”
Asked what it might be called, Fennell considered it for a moment.
“Well, the F-35 hovers and flies in the sky, and we’re creating a network of them, so … maybe something like ‘Sky-Net?’ That has a nice ring to it.”
Despite the delays, Pentagon officials remain committed to the F-35 Joint Strike Fighter program, calling it “absolutely vital to national security” to have a fighter jet that is bigger, slower, more expensive, and less armed than China’s J-16. The project has a total projected cost of $1.45 trillion, or as Bogdan pointed out, “roughly one Iraq.”
According to a Lockheed spokesman, the military hopes to take delivery of the first F-35s “sometime in mid-2015, or, you know, w) 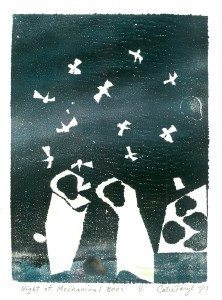 Night of the Mechanical Bees

This site uses Akismet to reduce spam. Learn how your comment data is processed.