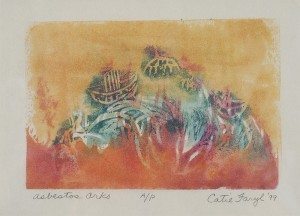 The day after seeing King Lear at Oregon Shakespeare Festival’s Thomas Theatre, I hurried to the library and checked out three different books about the play.  Of course I’ve seen King Lear at least four or five times, but in the intimate setting of the smallest theatre on OSF’s campus I saw and heard things that I hadn’t truly understood or previously perceived.

One thing that hit home was how very dark and un-redeeming this tragedy is for virtually every character in it.  Next thing was how rift with incredible quotes from the Bard this play is.  If “Ripeness is All” (Act  5, Scene 2) we are really treated to a very dirty, gritty, smelly production this time around!

The set is dark with lots of wrought iron gates, hardware and technology features.  Center stage a “dumbwaiter from hell” serves as a map case for the bequeathed kingdom, a conveyance for darklings in the dark, a sand and fire pit and a hovel hole for hairy homelessness.  A massive staircase stretches upward into the ethereal regions of majesty and ego. It is the golden light leading to an afterlife (whom many will hope for, but few here have earned)  built straight up into the rafters.  Shadows lurk up there too and there’s plenty of noise – timpani drums and indecent, reverberating curses from fathers, and viperous verbal bites from serpent-toothed offspring and pelican daughters.  Set changes and management of props  are cleverly handled by officers in uniform who start out as roadies and techies to handle TVs and other devices, and evolve over the course of the play to security guards, Police, a full riot gear Swat Team and finally a terrifying military force.

I always try to read the Director’s notes in the Playbill before the action starts, and also I like to close my eyes when the house goes dark, and open them to a new world.  I was instantly struck by a direct reference by Director Bill Rauch to Climate Change – “Eternally relevant, this play has a renewed urgency in our current era of frightening weather extremes.  We have left intact some of the often-cut political machinations.” In this story, “sin is plated with gold” (Act 4, Scene 6) and “even dogs are obeyed in office”!

What is most important to me about theatre, and why I write reviews, is to see what we can learn about our own times and experiences from art and drama of the past . . . . Bill Rauch continues in his notes to say “ One of my all-time favorite lines is in King Lear – The Storm Rages”.  Director Rauch touches on the plight of the homeless in his note “How does the former king describe a mentally challenged homeless person groveling in the mud as “Thou art the thing itself? ”.  This production of King Lear doesn’t pull any punches.  It exposes all our folly and foolishness; no age group, class, caste, sex or group is spared, and the visceral events remind us of how close we all live on the edge by the grace of benevolent climes and with the support and love from community, good friends and families.

“Elf all my hairs!”  (Edgar, Act 2, Scene 3); I love that line!  As if all that befalls us is caused by some impish malice!  Sometimes it happens that “Age is unnecessary”. . .  (Act 2, Scene 1) and we become useless. “The young arise when the old do fall!” There is a tempest in Lear’s mind and his anger is riled when his youngest and favorite daughter does not follow suit with over-glorious (and false) praise and glorified, flowery flatteries that her two older sisters have bestowed on their father, Lear.  Lear has apportioned one third of his kingdom to each of his daughters, but ends up cursing and banishing his favorite, Cordelia, when she answered him with facts and reminders of her devotion to him, rather than making grand yet meaningless statements like her sisters.

This sets into action the tragic story of how things in families can go from so-so to bad to worst.  Halfway through I began to wonder, where is Lear’s wife? (clues in Act 3, Scene 4).  Without a mother present, the family dynamics seem to have gone completely a-rye!  The question is raised   “Is man no more than this – unaccomodated man is an animal!”.  What incestuous nonsense has transpired or just how demented are all these people?  The two older sisters prove to be quite self-serving and disloyal as the play evolves, but one must wonder, beyond the obvious jealousy of the favoritism previously showered on Cordelia by her father, that there is a huge unbalance in the mix.  I suppose inheriting the wealth and power Lear has passed on to his heirs,(pre-mortem and with plenty of hooks)  is motivation enough.  But all around, there is distrust, anger and envy.  Envy and ego make a deadly combination, and as has been said about the Seven Deadly Sins, envy is the one without redeeming gratifications of the carnal senses.

The story of King Lear is reminiscent of the Saturn and his offspring.  His “power does curtsy to his wrath”.  Is it creeping senility or Alzheimer’s that adds wind and fire to this storm?  Like Saturn, Lear is so intent on his rage that he ends up destroying the things and people dearest to him.  Saturn ate his children and Lear’s appetite for self-aggrandizement and praise unleashes all his rage and unhinges his sensibilities.  The loyal fool and angelic Kent try to pull Lear back from the brink, but his anger has blinded him even as the Earl of Gloucester is cruelly blinded.

When trust is gone, and dragons’ wrath is given rein to storm, forgetting all prior sweetness and love, lives are lost. “As flies to wanton boys are we to the Gods, times plague when madmen lead the blind”.  Yet in Lear’s story, as ours, we can only look to our own misdeeds and “darker purpose” to place the blame.  Human folly is Infinite Jest.

Some say when we’re born we cry because we miss God. In this play Shakespeare states “When we are born we cry to be borne to this stage of fools”.  Quote the Fool, “Prithee, nuncle, be contented: ‘tis a naughty (wicked) night to swim in.  Now a little fire in a wild field were like an old lecher’s heart – a small spark, all the rest on’s body cold.  Look, here comes a walking fire.”