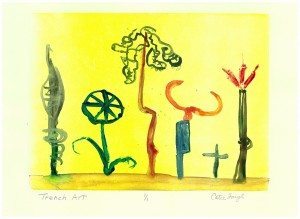 Letter to the Editor regarding SB 633 and related bills:
It’s not just that Monsanto, Syngenta and other bullying, foreign profit-takers are contaminating our heirloom and regionally adapted seeds and crops. It is also their chemical mixtures of Round-up to kill everything in the soil, avoid plowing and then plant genetically altered seeds that is so destructive.
Media, business and government blame the public for being sick and “out of shape”, because they are worried about how America can afford health care. It’s the omnipresence of GMOs, refined white GMO beet sugar, GM corn, soy, corn syrup and processed and animal feed, plus unhealthy growing and livestock practices foisted upon the farm communities, that are causing harm. The huge rise in obesity, diabetes, cancers and heart attacks is related to these foods, which is what poor, and beleaguered middle class, and unemployed are habituated to buying since its mass production makes it cheap, available and soothing, though of diminished nutritional value.
Our air and water are filled with pesticides and chemical fertilizers, killing off animals and insects, polluting streams, rivers, lakes and oceans, giving people asthma and other conditions. We are literally breaking the food chain within nature. The addictive cycle of Chemical, GMO, and Pharmaceutical agriculture must be ended through a massive intervention followed by a period of detoxification and economic reforms.  We must undo the patents that allow mega-corporations to own “intellectual property rights” of genetically modified organisms, genes and seeds and find remedies for binding contracts that force farmers to continue paying and using these products.
Don’t believe the lies from Chem/AG that their products are safe and their objectives altruistic and that they just want “to feed the world”.  If that were true, billions of dollars wouldn’t have been spent perfecting and owning gene code, but instead used to build wells, and support native and sustainable systems.  80% of the world’s food is still grown in small and mid-size operations, the majority of it by women.
FREE THE FARMERS AND THE LAND FROM THIS CYCLE OF ABUSE!  This tired system in place since WWII is losing its efficacy. It has depleted the soils, bred pesticide-resistant pests and spray resistant plant diseases, and made people lazy, ill and unresponsive. In the 1950s we were told how wonderful DDT was, yet it was finally banned in America in 1972, (when corporations like Monsanto, Dow, and others simply sold those toxins in the third world and polluted THEIR wells and soils.) GMO is being banned all over the world. We need to transition out of it before all our crops are non-exportable and our citizens, animals, and environment deteriorate further.

Folks, these aren’t Mendel’s peas, seeds or crops anymore!  This is TRANS-SPECIES TAMPERING, the ultimate arrogance, human folly and act of aggression by putting things where things simply do not belong! How it ever became legal for scientific, moral, and political reasons is highly questionable. Everyone needs to stop and reconsider this dangerous practice.  In my book GMO stands for GODDESS MIGHTILY OFFENDED! Catie Faryl Chamber of Commons Champions of the Commons on Facebook www.catiefaryl.net The Law declares him a thief who from the commons steals the goose, but the greater thief the law lets loose who steals the commons from the goose!